Woke up at 7.30am and met up with the rest of the bloggers for breakfast at 8am at the hotel’s lobby before heading to ExCeL London for the opening Keynote by Stephen Elop. Nokia World 2011 is held at ExCeL London which is about 5 minutes walk from our hotel. 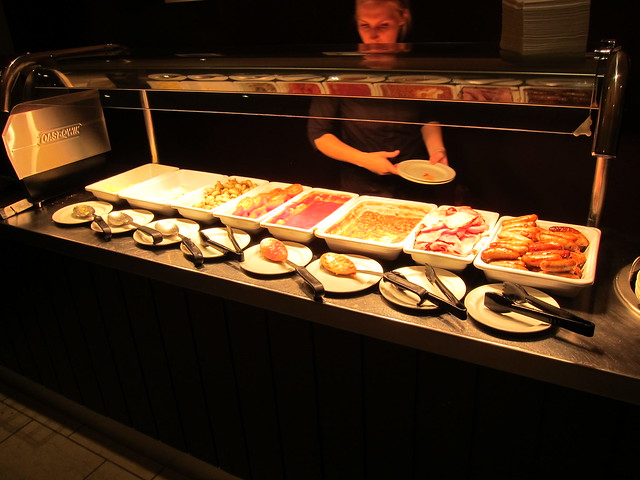 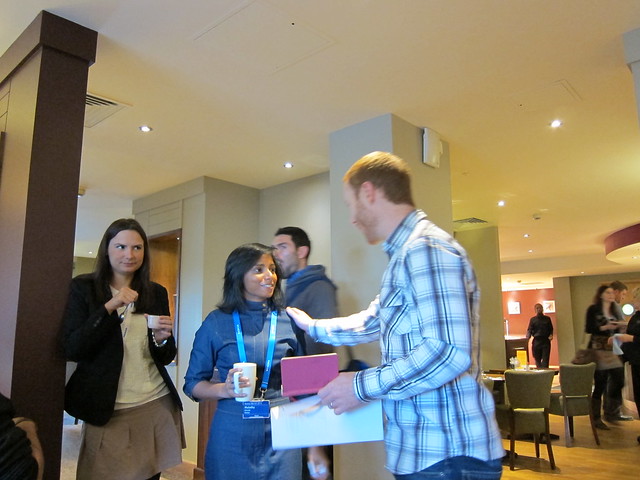 @malathy From Nokia Giving A Briefing 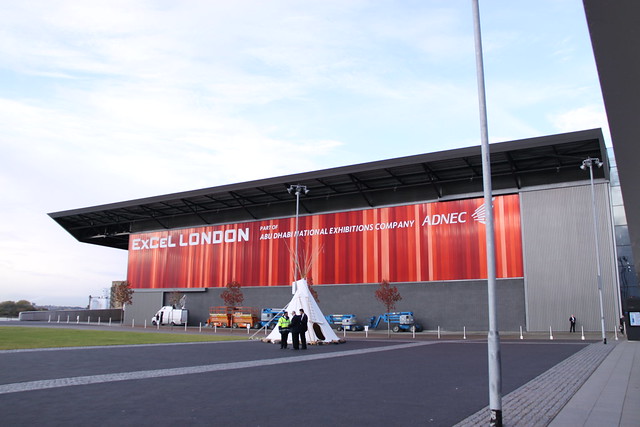 We reached there just in time for the keynote and boy it is crowded! 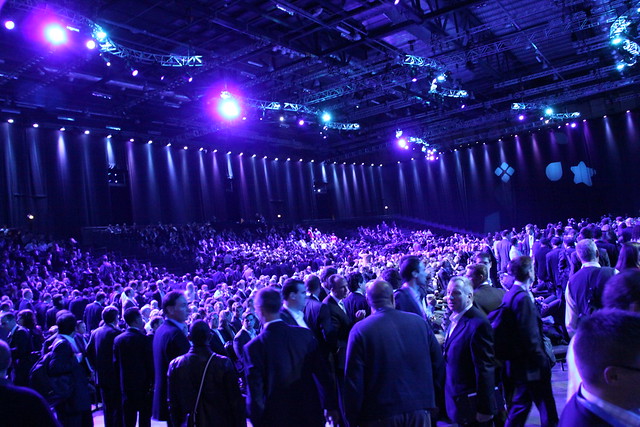 We were told to take our seats and shortly after the Nokia World 2011 opening video is played.

The screen projection is just fantastic, it is huge and spectacular, wonder how much money is spent just on the screen alone.

We all had problems connecting to the wireless network which I heard from the bloggers, the same thing happened at the previous Nokia World, and this time round, Nokia spent even more money to ensure that the wireless network works, but apparently it still does not work. The poor access point just got hammered like nobody business. I guess professional bloggers like Engadget relies on 3G instead, but the 3G signal inside the hall wasn’t that great either as I guess the base station is overloaded as well.

Colin Giles, Executive Vice President of Sales was up on stage first to give the welcome speech followed by Stephen Elop, CEO of Nokia.

Blanca Juti, Vice President of Mobile Phones Marketing took the stage after and that is where the real deal starts. She introduces 4 new phones to the new Asha family.

The name Asha is derived from Hindi – meaning ‘hope’ and Asha signifies Nokia’s focus on positive user experiences and connecting millions of people to new opportunities that help them reach their aspirations. 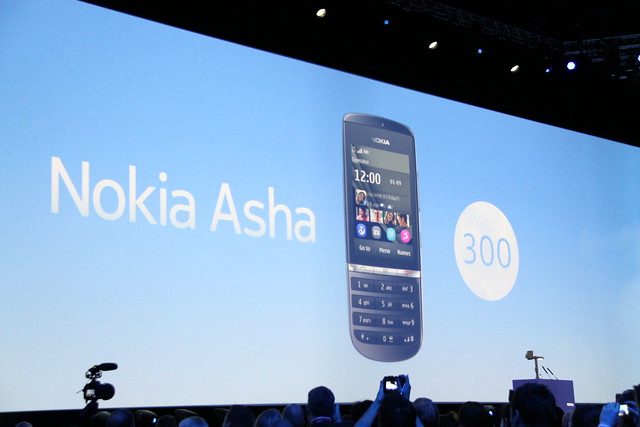 The beautifully designed Nokia Asha 300 is a touch device which also offers the convenience of a keypad. The Nokia Asha 300 has a powerful 1GHz processor and 3G to deliver a faster Internet and social networking experience. The Nokia Browser allows for fast, affordable and localized Internet access by compressing web pages by up to 90%.

Users have fast access to messaging, email and instant messaging from the home screen and can swipe to access apps, music or games from the Nokia Store. The Nokia Asha 300 also arrives preloaded with the popular Angry Birds Lite game.

The Nokia Asha 300 comes with a 5 megapixel camera, a music player, FM radio, Bluetooth connectivity and can handle memory cards up to 32GB. The price will vary by market and operator. The estimated retail price for the Nokia Asha 300 will be approximately 85 EUR, excluding taxes and subsidies. It is expected to start shipping in the fourth quarter of 2011. 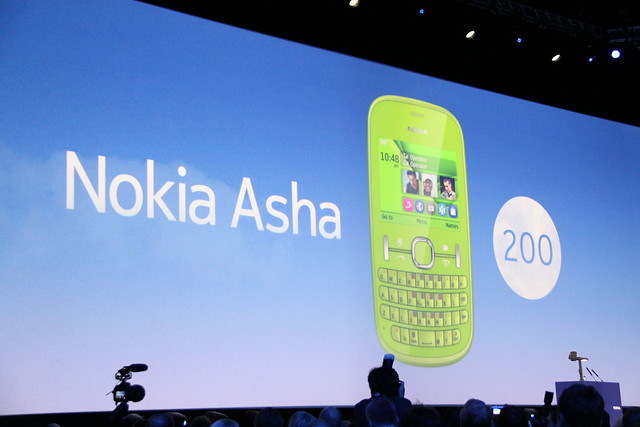 The Nokia Asha 200 is Nokia’s latest dual SIM phone with Easy Swap functionality, allowing consumers to easily change their second SIM without switching the device off.

It is a fun and colorful QWERTY phone designed to meet the needs of young, urban consumers who want to constantly stay in touch. The Nokia Asha 200 features integrated social networking, email and IM, adding RenRen, Orkut and Flickr support. Nokia Asha 200 makes it possible to carry thousands of songs with support for 32 GB memory cards and providing a battery for an amazing 52-hour playback time. The price will vary by market and operator. The estimated retail price for the Nokia Asha 200 will be approximately 60 EUR, excluding taxes and subsidies. It is expected to start shipping in the fourth quarter of 2011. 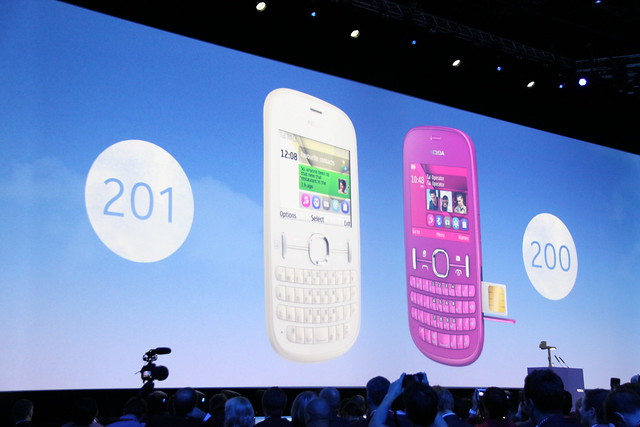 The single SIM version of the Nokia Asha 200, the Nokia Asha 201 is ideal for young consumers who wish to stay socially connected, are price conscious and like listening to music. The Nokia Asha 201 has great music features including a high performing loudspeaker, enhanced stereo FM radio and ringtone tuning. With the Nokia Browser you get even faster, even better and more affordable access to the Internet. It supports up to 32 GB memory cards and provides a battery for 52 hours of music playback time. The Nokia Asha 201 also supports push email as well as the popular Whatsapp messaging app. The price will vary by market and operator. The estimated retail price for the Nokia Asha 201 will be approximately 60 EUR, excluding taxes and subsidies. It is expected to start shipping in the first quarter of 2012. 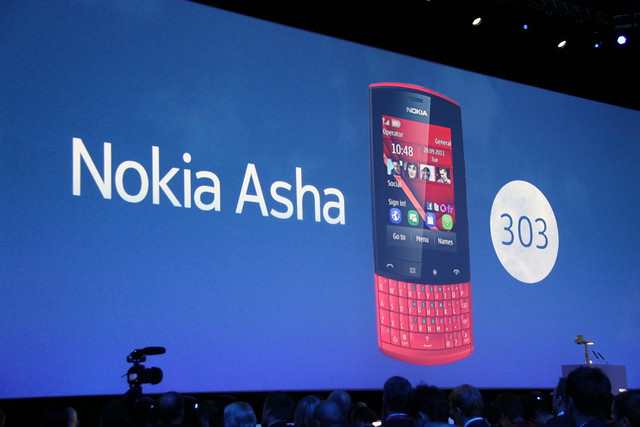 The device harnesses a powerful 1Ghz engine, 3G and WLAN to deliver a fast Internet experience. Social networks, email and IM are at the center of the experience, easily accessible from the homescreen. The Nokia Asha 303 is powered by the cloud-based Nokia Browser, which by compressing the web by up to 90%, provides higher speeds and a more affordable access to the Internet.

Entertainment and applications are also a core part of the Nokia Asha 303 offering. Angry Birds Lite, the popular mobile game, comes preinstalled, together with support for other globally relevant applications such as Facebook Chat, Whatsapp messaging and the latest release of Nokia Maps for Series 40 (in selected markets). The price will vary from market to market and operator to operator. The estimated retail price for the Nokia Asha 303 will be approximately 115 EUR, excluding taxes and subsidies. It is expected to start shipping in the fourth quarter of 2011.

Stephen Elop was back on stage and pictures of the Nokia Lumia 800 was at the background and everyone was taking out their cameras/phones to take pictures and the race is on to be the first one to tweet about it. 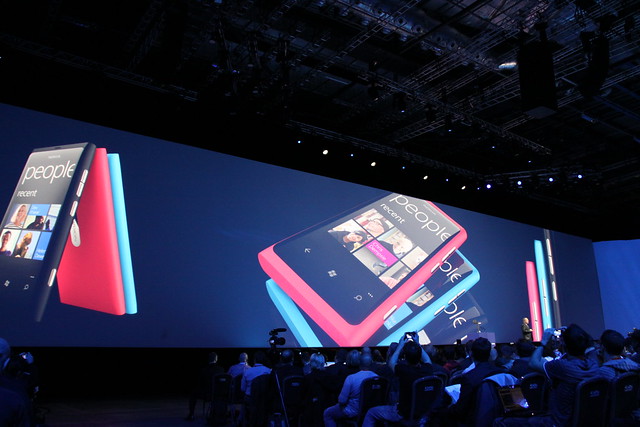 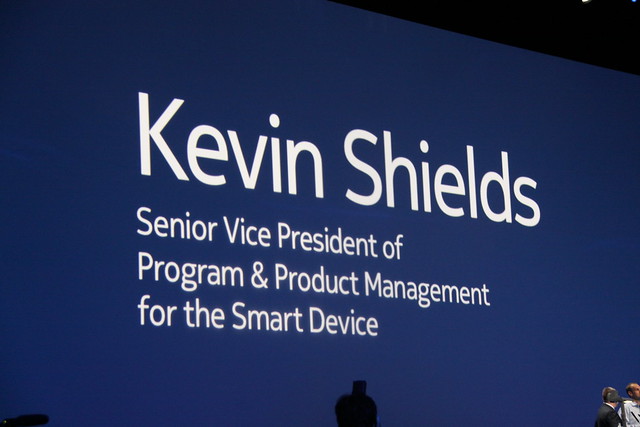 Kevin Shields With A Long Title

And the Nokia Lumia 800 was announced! 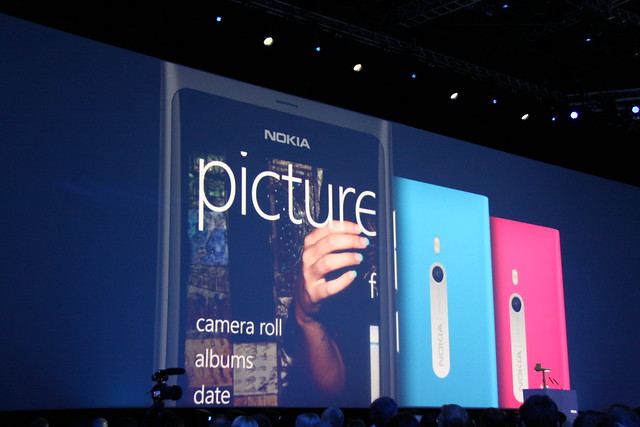 They are not done with just 1 Windows Phone device, Nokia Lumia 710 is announced next! 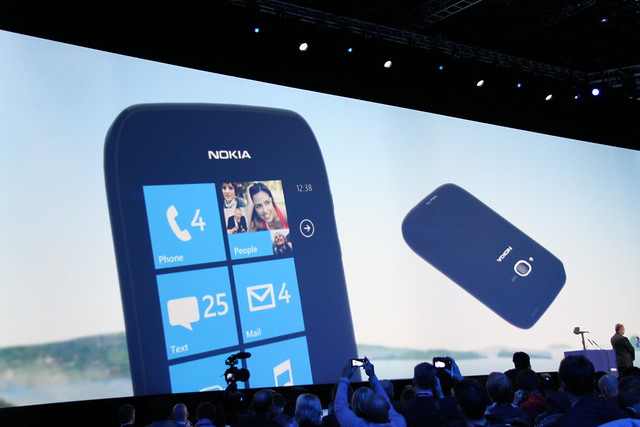 The purposely built, no-nonsense Nokia Lumia 710 can be personalized with exchangeable back covers and thousands of apps to bring the Lumia experience to more people around the world. The Nokia Lumia 710 is designed for instant social & image sharing, and the best browsing experience with IE9. It is available in black and white with black, white, cyan, fuchsia and yellow back covers. With the same 1.4 GHz processor, hardware acceleration and graphics processor as the Nokia Lumia 800, the Nokia Lumia 710 delivers high performance at an affordable price. The estimated retail price for the Nokia Lumia 710 will be approximately 270 EUR, excluding taxes and subsidies.

Nokia differentiate itself with the rest of the Windows Phone 7 makers by having exclusive apps like the Nokia Drive, Nokia Maps, Nokia Music and ESPN. I love the Nokia Drive app, it is a free voice-guided turn-by-turn GPS navigation app and it allows you to preload any supported countries map into it as well.

I am not a big fan of sports, but I guess if you are, the ESPN app is suitable for you. It supports Windows Phone 7.5 Mango deep pining feature that allows you to keep track of your favorite teams in various sports right in your home screen via Live Tiles. 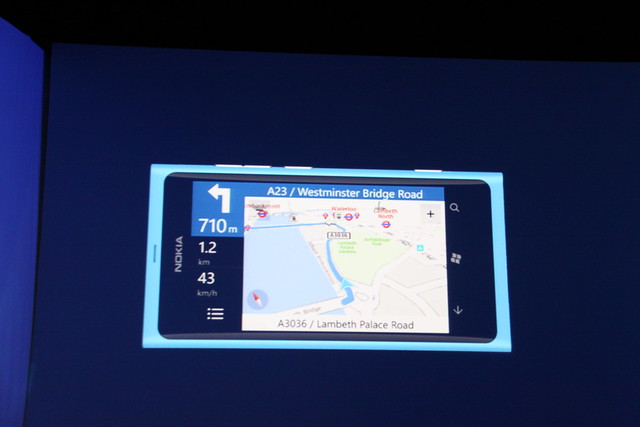 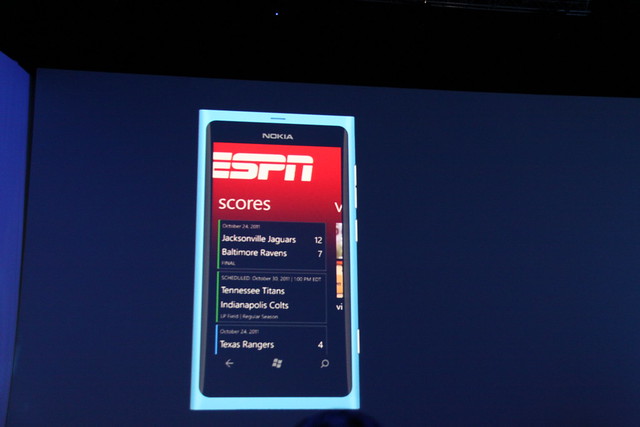 Both smartphones include signature Nokia experiences optimized for Windows Phone, including Nokia Drive, which delivers a full-fledged personal navigation device (PND) with free, turn-by-turn navigation and dedicated in-car-user-interface; and Nokia Music introducing MixRadio, a free, global, mobile music-streaming application that delivers hundreds of channels of locally-relevant music. In an update delivered later this year, Nokia Lumia users will also gain the ability to create personalized channels from a global catalogue of millions of tracks. Also integrated in Nokia Music is Gigfinder, providing the ability to search for live local music for a complete end-to-end music experience, as well as the ability to share discoveries on social networks and buy concert tickets also coming in the Nokia Music software update delivered later this year. 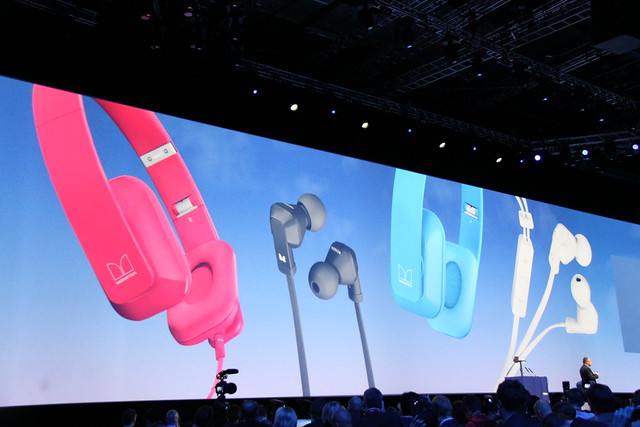 Completing the ultimate mobile audio offering, Nokia also introduced the on-ear Nokia Purity HD Stereo Headset by Monster and the in-ear Nokia Purity Stereo Headset by Monster, co-designed and co-developed by Monster, a recognized leader in high performance audio. Both products provide a fresh listening experience and are the first output of the exclusive long-term partnership between Nokia and Monster, intended to introduce a range of premium audio accessories to reflect the outstanding quality and bold style of the Lumia range. 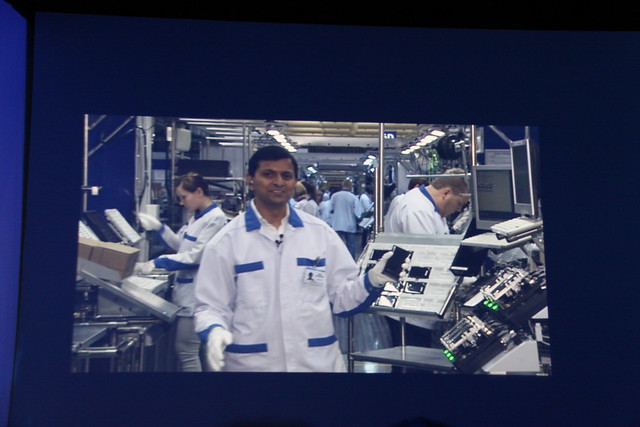 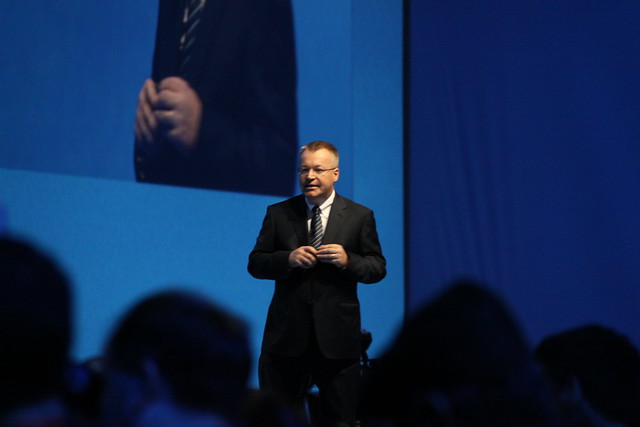 Stephen Elop Is Back On Stage To Wrap Things Up 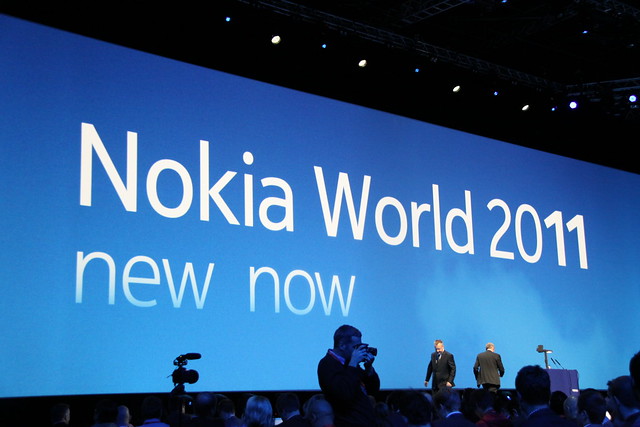 And that is the end of the opening keynote! After that we are being invited to the Experience Area which is just opposite to play with the devices. 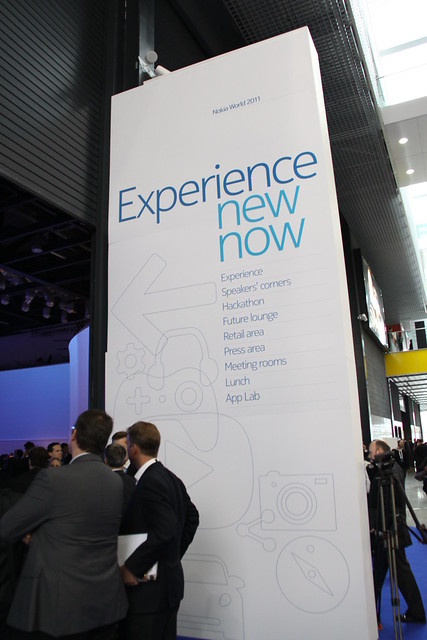 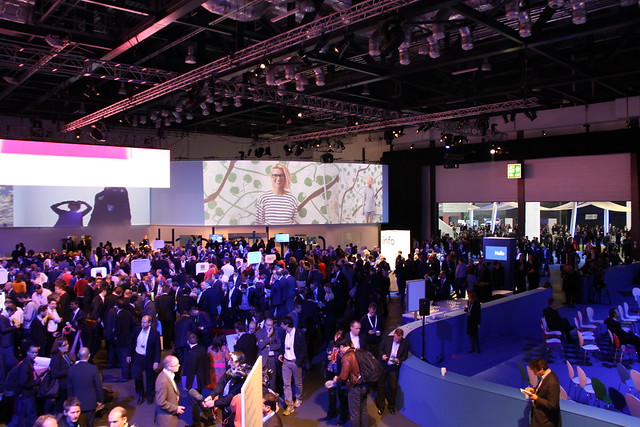 It Is So Crowded

The experience area was crowded, can’t really take proper pictures without people behind you pressurizing you to hurry up (in a silent manner). The food catered was pretty good, it is unlike Singaporean style buffet where you help yourself with the food. For this, you take an empty plate and walk past the food and the server will put the food on your plate and that is exactly what they do in army cookhouse! Surprising the queue was not long despite a huge crowd and only 2 dinning areas. I guess people are more interested in the products than lunch, which is a good thing!

They have cans of Pepsi, Fanta, and some other soft drinks for you to take from the fridge. They also have an area for proper coffee like americano, espresso, latte, and even smoothie! The Optimsim Smoothie is awesome! 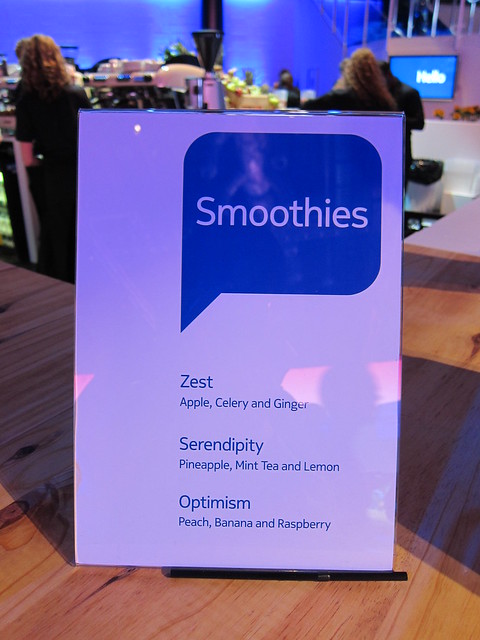 After lunch, we gathered in a room where they loan us the Nokia Lumia 800 for the remaining 2-3 days to play with and they even got us a prepaid MicroSIM card so we can use it on the go! Thumbs up for that! 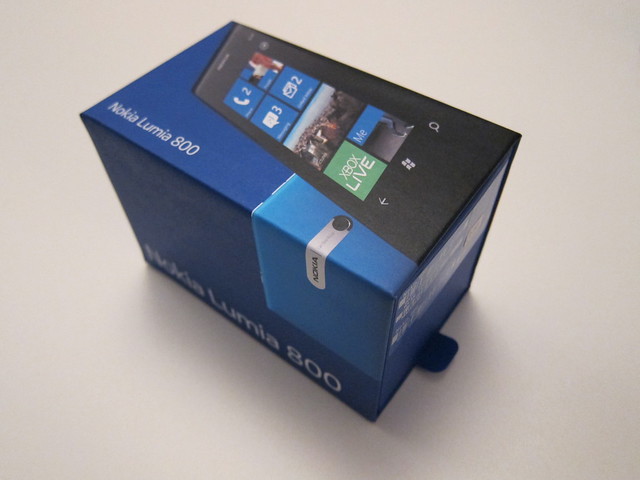 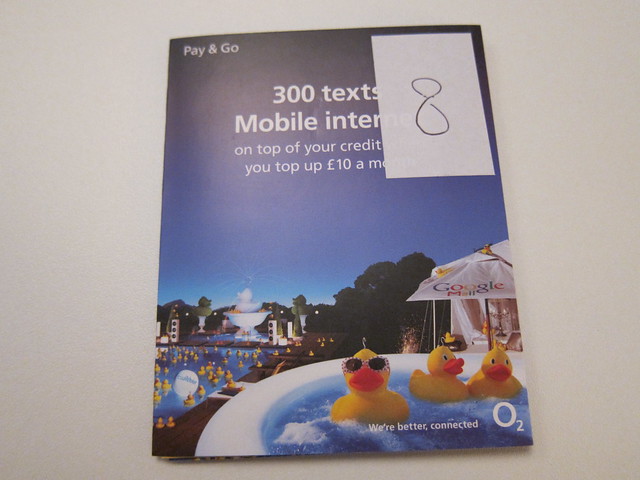 Something not many people are aware, Nokia also announces Nokia Pulse, I think of it as a mash up between Yammer and Google Plus. Yammer for the closed network and Google Plus for the sharing of content with this close network.

Here is the official statement of it:

Nokia Pulse brings your everyday conversations to life by automatically tagging photos and updates with your location.

Every conversation, from pickups and drop-offs to meet-ups, is as instant, private, and simple as sending a text, but far more useful and engaging. Nokia Pulse is integrated with Maps, so finding people nearby, discovering new places, and getting directions is a snap.

Nokia Pulse App will be available on Windows Phone 7, Symbian and Series 40. It is also available on mobile web as well on the web, check out pulse.nokia.com.

We left the conference about 6pm and headed back to the hotel for some rest before going back to ExCeL London again for the Nokia Party at 7pm!

Pricing & Availability Of The Announced Products 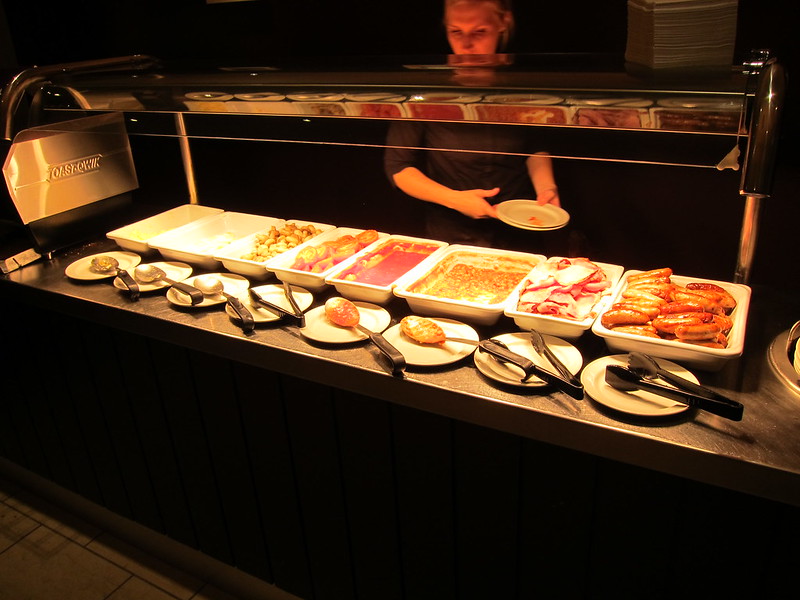 Stay tuned for the next blog post for Nokia World 2011 – Day 02, where I will cover the ground of the Experience area!

Derrick Koh who is the Head of Communications for Lenovo in Asia Pacific drop me a message on Facebook and ask me whether I am free to attend the Lenovo's booth media tour. Since I  …
Lester Chan · 12:20, 08 Mar 14