Samsung sent me the Samsung Lapfit LD190G for review. Thank you Daniel =D

There are currently 2 models/sizes available, the LD190G (RRP: S$239) and LD220G (RRP: S$339). The sizes are 18.5″ wide and 21.5″ wide respectively. For the LD220G model you are able to connect to multiple Lapfit monitors or any USB devices through the 2 extra USB ports at the back. You can connect up to a maximum of 4 monitors at a same time with a serial USB connection and 6 monitors with a parallel USB connection.

Package Contents
The contents in the package is pretty straightforward as shown in the picture.

Features
According to the official website, it states that the Lapfit monitor uses 33% less energy than conventional monitors and hence as stated in the specification, it uses between 20W to 22W of power. The convention monitor stand and base is missing from the Lapfit. Instead it uses a Photo Frame-like stand attached at the back of the monitor in order to match the height of a laptop to provide a harmonious dual display and that explains why the Lapfit may look lower than the usual conventional monitor. The Lapfit is able to provide tilting of 10° to 40° degree to match the viewing angle of the laptop screen.

My Thoughts
The monitor is finished in Piano Black and it is very glossy and hence no matter how I take the photo, it will always have a reflection of my hand holding the camera.

The monitor is slim and light weighing at 3.6kg and it is very easy to carry around as there is a groove at the top (where the ventilation holes are) for you to grip it as shown in the back view picture above.

The Photo Frame-like stand attached at the back of the monitor can be pulled till you hear a clicking sound (the 10° to 40° degree tilting comes after the clicking sound) and that will make you monitor stable when you place it on the table. At first I dare not pull it out too much as I afraid that it might break, and hence when I place it on the table, slight movement on the table, will cause the monitor to topple and I find it weird. I did not find anything that says about the clicking sound in the user guide, so I assumed that the user guide assumed that its consumers know about it.

There are 2 rollers which is attached to the end of the stand and that allows you to tilt the monitor easily without the need of hearing the screeching sound.

There are also 2 rubber pieces attached at the bottom of the panel to ensure that it does not move easily.

There are only 3 ports at the back of the monitor for the LD190G model, 1 for the USB connection, 1 for the D-SUB connection and the last one is for the Power Cord.

Using With Windows Laptop
The current latest drivers for Windows is v4.6.

I am using Windows 7 RC1 on my laptop and apparently the driver does not work with Windows 7 yet. When I first plug the USB cable into my laptop, Windows 7 manage to detect it as Samsung UbiSync Monitor without the need to install the CD at all. But because nothing appears on my screen after that, I tried installing the drivers from Samsung Website and when i run the setup.exe, it states that my Windows is not compatible. I tried running it in backward compatibility mode as Windows Vista SP2, it still does not work. hopefully this issue will get fixed as soon as possible.

Luckily there is still the VGA cable to fall back on, the moment I plug in the VGA cable and viola, it displays perfectly. Note that my laptop has a native resolution of 1024×768 (old laptop) and hence when I extend the monitor onto the Lapfit, it has the black area on the side because the aspect ratio is 4:3. Samsung called it the intelligent Image Size function which maintains 4:3 integrity on a wide screen and effectively eliminates image distortion and stretching.

I tried it on my brother’s laptop which is running Windows XP SP3. Similar to Windows 7, Windows XP detect it as Samsung UbiSync Monitor without the need to install the CD. However to play safe, I downloaded the drivers from Samsung website again, and after running setup.exe, viola, my desktop extended to my Lapfit monitor.

Note that your Lapfit monitor is defaulted to Extended Monitor after you install the driver.

Using With MacBook/MacBook Pro
If you are using a Mac, you need to download the drivers manually from the Samsung Lapfit LD190G as it is not included in the CD. Do note that the file will be in rar and hence you may need WinRAR in a Windows machine to extract the DMG file.

Once you installed driver, you will need to restart your Mac. After that just go to System Preferences -> Display and click on the Detect button and viola!

Conclusion
The monitor is not really a true plug and play monitor as it still requires you to install the driver on both PC and Mac (you just need to do it once). The software does make configuration the Lapfit much easier like whether to extend the monitor to the Lapfit or use it as the main monitor, etc. However, the thing I like about this monitor is that it is catered specially for laptops because it is designed in such a way that it almost the same height as your laptop screen when you place it side by side. Without the conventional monitor base/stand, it makes the Lapfit monitor very compact and does not occupy much space on your table. For those who are considering getting a monitor specially for your laptop, you might want to consider the Lapfit. The recommended retail price (RRP) for the LD190G is S$239, which is quite reasonable.

If there is a monitor bag specially designed for it, I think this would make carrying it around easier and Samsung can market it as a portable monitor for laptops.

Hopefully the driver issues for Windows 7 will be ironed out before Windows 7 is launched on the 22nd October 2009. 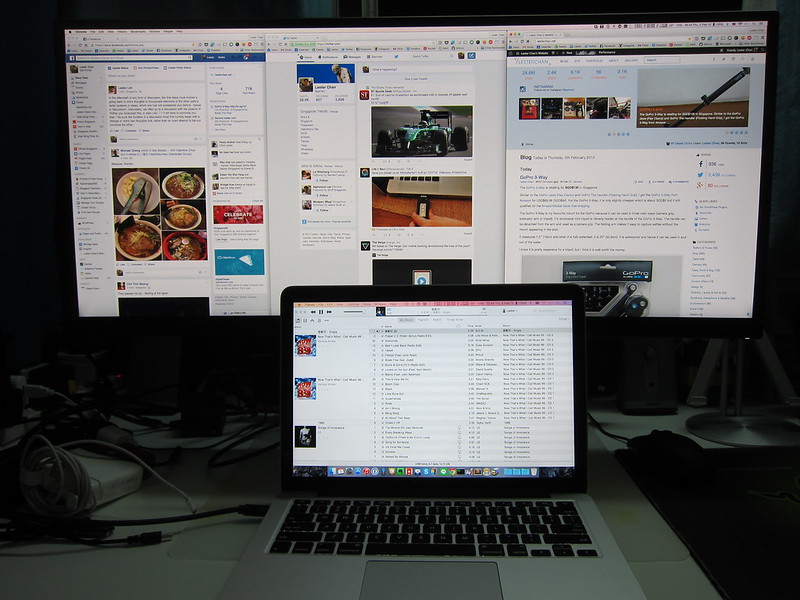 CtG – Too many gadgets! | claudia.sg