I was invited to Nokia Connection 2008 which is an annual event. It is normally held just before Communicasia. This year it was held on the 16th and 17th June 2008. The first day was held at the Singapore Recreation Club while the second day was held at Mandarin Oriental. This year Nokia Connection saw the launch of two new products, the Nokia E66 and the Nokia E71 and the introduction of Share on Ovi.
Day 1
The event for the first day started at 7pm at the Singapore Recreation Club (SRC) which is located at B Connaught Drive, Singapore 179682 (The Padang). Nokia rented the space from SRC and catered the food from Mandarin Oriental. I am so afraid they are going to use SRC’s food which I have no idea whether it is nice or not. Nokia has not break the thought “Nokia Events Means Good Food” in me yet, and hopefully it will never happen.

The first event for the day was a performance of drums.

The announcement of Nokia E66 and Nokia E71 was up next which I predicted correctly.

After the announcement, this video is projected to the ceiling of the tent and it was a fantastic work of art. It was superbly done, they even make use of the shape of the tent to bring out the 3D feel of the projection. I have took the whole video and uploaded it to Youtube. It is also on Share on Ovi as well.

The Nokia E66 is the successor to the Nokia E65 which is also a sliding phone. The camera in Nokia E66 has been upgraded to a 3.2MP from the original 2.0MP in E65. There is also a front facing camera in the E66 which is missing from the E65. Seriously, I think a phone without front facing camera cannot be considered a true 3G phone, it looks silly to let the person see you and not letting you see the person. *Cough* *E51* *Cough* *iPhone 3G* *Cough*

I like the feel of the E66 much more than the E65. The E65 felt rubbery to me while the E66 felt more metallic and solid when I hold it in my hands, there is absolutely no squeaking sound when you “squeeze” the phone, the build is rock solid and the sliding is as smooth as that of E65.

The Nokia E71 is the successor to the Nokia E61i. Similar to the E66, E71 has a 3.2MP camera which is an upgrade to the 2.0MP found in E61i. There is also an addition of the front facing camera which is missing in E61i.

The E71 is much slimmer than the E61i and it has the same solid build as the E66. I did have a chance to play with both the E61 and the E61i and I didn’t really like it because it looks very plasticy and there is a squeaking sound when you held it too hard and most of all, the design kinda suck.

The summarize it all, the E66 and the E71 has the exact same features, pricing and even colors. The only difference is the screen size for E71 is slightly bigger than E66, the E71 is slimmer but bigger than the E66 and of course the E71 is a candybar phone that comes with a QWERTY keypad while the E66 is a sliding phone with normal keypad. It all boils down to your needs to choose between the E71 and E66, but personally, I will choose the White steel E71 as I do a lot of typing on my phone.

There were several showcases like Nokia Maps 2.0, Share on Ovi, N-gage, 6212 Classic, several XpressMusic phones, Nokia Music Store, Nokia Bluetooth headsets, Nokia Car Kit and receiving DVB-H using N96 and the N77. The clarity of DVB-H is superb, all we need is just a VGA screen! Hope it gets roll out in Singapore before WorldCup 2010.

There were 2 performances by a Malaysian Duo called Point Blank and a Singapore Band which I did not really catch the name.

And that wraps up day 1.

Day 2
Day 2 was a Media Workshop and Trade activity and it was held at Mandarin Oriental‘s ballroom. I was there for the media workshop.

I would like to bring your attention to the improved Home Screen especially 3 new features which can be seen in the photo below.

The first one is Home Screen Notifiers. All the E-Series phones has configurable home screen in the form of plugins which you can choose what to display on the home screen unlike the N-Series where we have no control over it. I really hope Nokia will port this feature to the N-Series in the near future. When you get an SMS, MMS or a Missed Call, for the E-Series phones, it will display it on your home screen just above the Calendar “line”. For the N-Series phones, it will display it as notifications rather than displaying it on your home screen. For the E71 and E66, Nokia replace it with an icon just above the soft key menu which I think is non-intrusive and in the same time it will definitely catch your attention. Before I came to know about this, I was wondering that the icon means when I first got hold of the phone.

The next feature is Intelligent Contact Search. You no longer need to search your contacts by opening your phonebook, you can directly press any alphabet on the home screen and it will search your contact automatically. This is really a neat feature.

The last feature is Mode Switching For The Home Screen. Think of this as a user profile in Windows XP or Vista. When you logged in using User A, it will display User A’s wallpaper, shortcuts, email accounts, etc and when you logged in using User B, it will display User B’s wallpaper, shortcuts, email accounts, etc. But in this case, you do not need to login, you just need to press a button. You can have your business profile which displays all your email accounts and a personal profile which displays your personal email account. For example, you can use the business profile on weekdays and the personal profile on the weekends.

The next speaker is Marcus Tan from Nokia Interactive Advertising which gives us an overview of Nokia’s role in mobile advertisement. Currently interactive advertising which is also known as the pull media is starting to pick up and is proven to be more effective than push media. He showed us a video of the 4th screen which is by far the best Nokia advertisement video till date. The video was shown at Nokia: Go Play last year. Thanks to Dinesh, I managed to get a copy of the video and upload it to Youtube 9 months ago, you can view the video here.

The last speaker for the day is Keith Liu and the topic he is talking about is Share on Ovi. Nothing much to talk about here as I have blogged about it 3 weeks ago for the launch of the Nokia N78.

Lunch was at MELT and this is my 3rd time eating there and I want to thank Luanne for treating me a glass of coke during Lunch. Thank you Luanne. 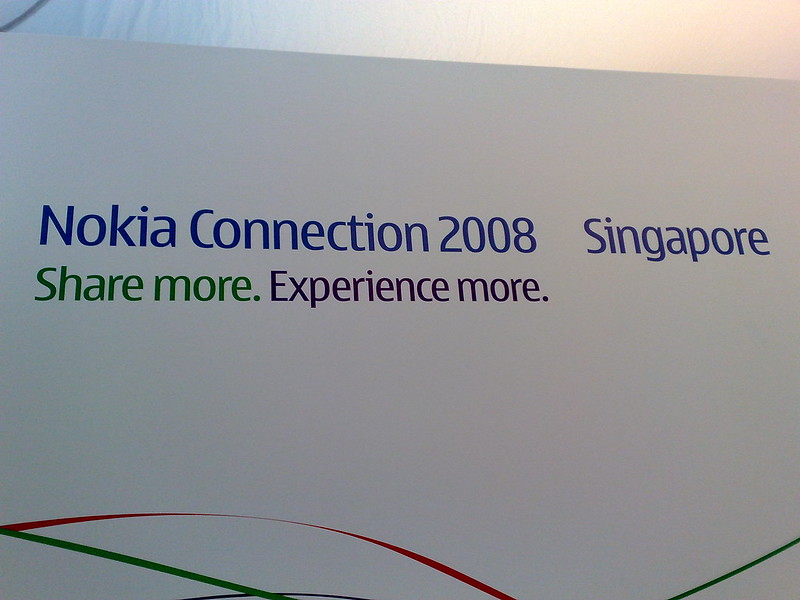