SingTel send me the Motorola BackFlip for a review last month but because of my busy schedule I can only review it till recently. I apologize for the delay. I will be only covering the physical aspect of the phone because in terms of OS and software it is very similar to the Motorola Dext which I reviewed 5 months ago.

If you notice the battery cover comes separately in the package instead of being pre-fixed to the back of the phone.

I would consider the Motorola BackFlip a form factor of its own because it is neither a candybar phone, sliding phone or a flip phone. The reason it is called a BackFlip because at the back instead of the usual battery cover, you will see a keyboard and the keyboard can be flipped so that it is directly below the screen.

Once you did that, the hidden trackpad at the back of the screen is revealed. You can use the trackpad to navigate around the phone. It takes quite sometime to get used to. Because of the trackpad, the Motorola BackFlip has 3 forms on input method, touch screen, QWERTY keyboard and trackpad. I would say it is an overkill because I don’t think you can move the mouse cursor faster than you tap on the screen.

The keyboard does not have any gap because most of the time it will be facing down on a table and having gaps means dust and even bits of food will get into the keyboard (like our desktop’s keyboard, I know we all eat in front of our computer at one point). The keyboard provide moderate tactile feedback but it felt a little stiff when typing on it. The camera and LED flash light is located on the keyboard also put placed at the top. It looks pretty well camouflage.

When your battery is getting weaker, it will prompt you to charge via blinking the light around the micro USB port. When it is being charged, the light will be lighted permanently. I think that is a pretty cool feature.

The review unit that I received is still Android 1.5, but no worries as it is upgradeable to Android 2.1 when it is make available by Motorola. I can’t seem to find any difference in terms of hardware when compared to the Motorola Dext. The battery of Motorola BackFlip is 20mAh lesser than the DEXT which I don’t think it will be that noticeable. Similar to the DEXT, navigating around the BackFlip is laggy as well and all the cons about MOTOBLUR platform that I mentioned in my Motorola Dext review are still present. Pretty disappointed with that. Common Motorola, I believed you can do better than that! 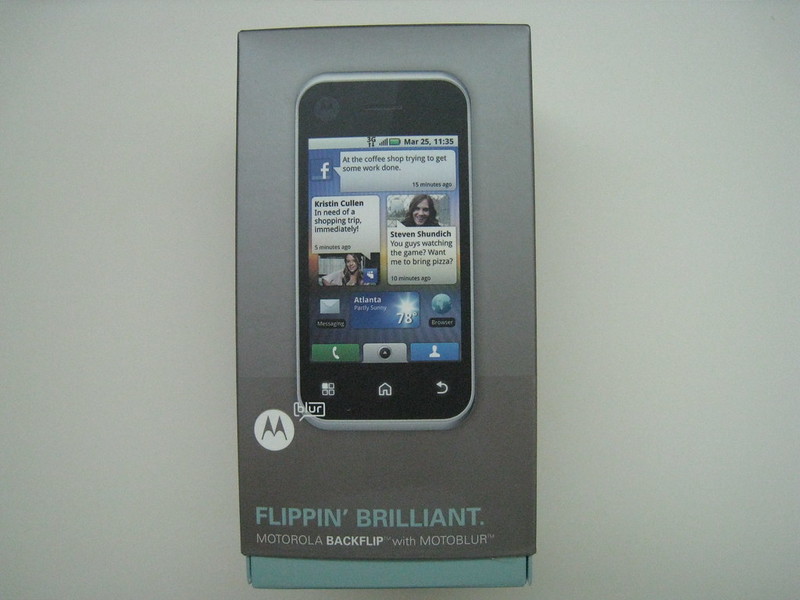