The packaging is extremely simple, just the Pebble Watch and a special USB cable to charge the watch. The instructions to set it up is located at go.getpebble.com (link is printed on the box).

There are three buttons on the right of the watch. They are Up button, Enter button and Down button.

There is only one button which is the Menu/Back button on the left of the watch and the magnetic charging port is there as well.

After pairing the watch with my iPhone 5 using Bluetooth, it prompt me to update the firmware of the watch. Once that is done, basically you can start using the watch. If you are on iOS6, remember to enable ‘Show Notifications’ by tapping on the blue arrow next to the Pebble XXXX device under the Bluetooth Menu of your iPhone.

Right now, I think the functionality of the Pebble watch is pretty limited but I hope their SDK will encourage developers to develop app for it.

I left the Pebble Watch connected to my iPhone 5 via Bluetooth and after 6 hours, my iPhone 5 battery drop by 15%.

I am not too concern about the battery life of my Pebble Watch, but on paper it says it can last up to 7 days. It lasted about 4 days for me. 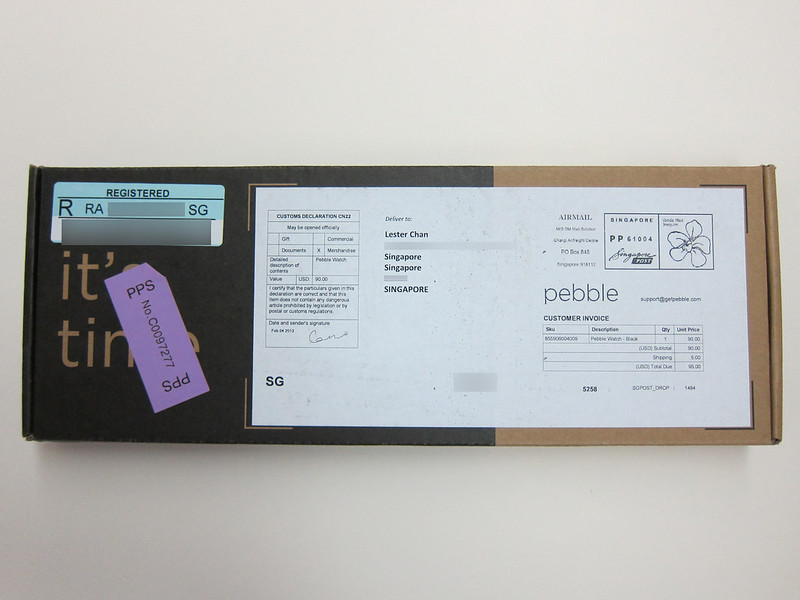