Day 03 starts off with the same format as day 02, which is a breakfast Q&A with the Nokia Maps team (Pino Bonetti & Mark Thomas).

Nokia Maps update will be out soon for Nokia Lumia devices which gives you greater zoomed-in details as well as the ability to create and share your favorite places via social networking sites.

Nokia Maps is there to help you, whether you’re in a car, or on foot.

When you’re in hurry it can be confusing to see every eating choice, or art gallery – you only want to know where you’re going.

That’s why Nokia Maps has also been updated for Windows Phone to make the experience simpler, with fewer intrusive objects and signs to get in the way of where you want to go – and a reduced color palette to allow the brain to process information more easily.

Now you can zoom in to get all the detail you need, and pull back for larger context about what route you need to take – with pedestrians and drivers seeing different maps to reflect their different experiences.

With the updated Nokia Maps you can now also create and collect your favourite places, and access places you’ve recently visited.

Then, if you’re travelling with friends or colleagues, you can share your route with SMS email or social networks.

Nokia Maps now covers over 190 countries – and uses the latest technology to make sure that images are viewable from any browser, device and operating system.

Nokia Drive 2.0 will be out soon which will get full offline. In the pipeline is Nokia Drive 3.0, which is a bigger update that allows you to pin your trip to the live tiles of your home screen. It will also learn your daily commute routes and automatically adjust your routes depending on the day’s traffic.

Nokia Drive has been one of the most popular services on the Lumia, offering free turn-by-turn voice guided navigation in over 100 countries, with multiple views, larger icons for in-car arms length use, one easy search box, and fast route calculation and preview.

Now Nokia Drive on Lumia gets full offline support, with offline search and routing from calculating a route, to navigation and re-routing. A newly designed dashboard now shows speed limit alerts, as well as the speed you’re travelling at, as well as estimated time or arrival, time to destination and distance to destination. You can also access a list of recently saved destinations through a single tap, and then start turn-by-turn navigation.

Nokia Public Transport is a new app that will be rolled out to existing Nokia Lumia devices. Nokia Transport will give you an real-time arrival timing of public transportation such as train and buses. If you city does not have any these data available, the timing will be estimated. For Singapore/Malaysia case, it will be estimated instead of real-time. I really hope Nokia can work with LTA to get the real-time information which is already available out there.

Nokia Public Transport is a natural complement to Nokia Maps and Nokia Drive as part of navigating your life – and is now available as an app on the Nokia Lumia.

Nokia Public Transport is a unique service that allows you to plan fast inner-city routes from point to point, and work out your time of arrival.

Using Nokia Public Transport you can see when the nearest train, bus, tram or metro leaves, find out how to get to the station, discover if you need to change trains or lines along the way, and then use walk routing to reach your final destination.

Check out My Nokia Blog: Mega Q&A session: Lumia/WP Production/Design, Maps, Entertainment & More for more details of the morning Q&A.
There is no lunch Q&A and hence we got the whole afternoon free to ourselves. I went back to MWC to Nokia booth as I got tip that Nokia is giving away free stuff and that includes a Nokia Lumia 800!

For each giveaway, they will give out 100 lollipops to the guests around the booth but only 20 of them will have a slip of paper in it to indicate what item you won. If your lollipops contain a piece of paper, you won something, if not try again at the next giveaway!

I did not win in the first giveaway, but I won the Nokia Purity HD Stereo Headset by Monster in the second giveaway (stayed tuned for that blog post).

After the first giveaway, I went to take a look at the Android Booth because I missed it the previous days. They are giving out free smoothies and Ice Cream Sandwich (not the phone) at the booth!

After the visit to the Android booth, I went out of MWC, took a subway to Diagonal station which is their shopping district to help my mom get her Loewe bag. There is a protest going on there as well and I believe they marched all the way to MWC (which is about 6 stations away).

It is a peaceful protest but I heard things got bad when they reached the MWC. I think the protest is about Capitalism. When I got back to MWC, the main entrance was closed and we have to enter via the side entrance (which is quite a far walk).

Took a look at these booths after I got back:

Did I mention that Nokia also won a couple of awards?

Dinner was at Ca La Nuri together with Nokia Asha 202 and 203 product managers (Loek van der Helm & Vivian Chan). It is a small world that Vivian is also a Singaporean who once worked for Nokia Singapore but now is based in Beijing (still working for Nokia).

We also ended the day quite early as some of the guys have an early flight back home the next day. 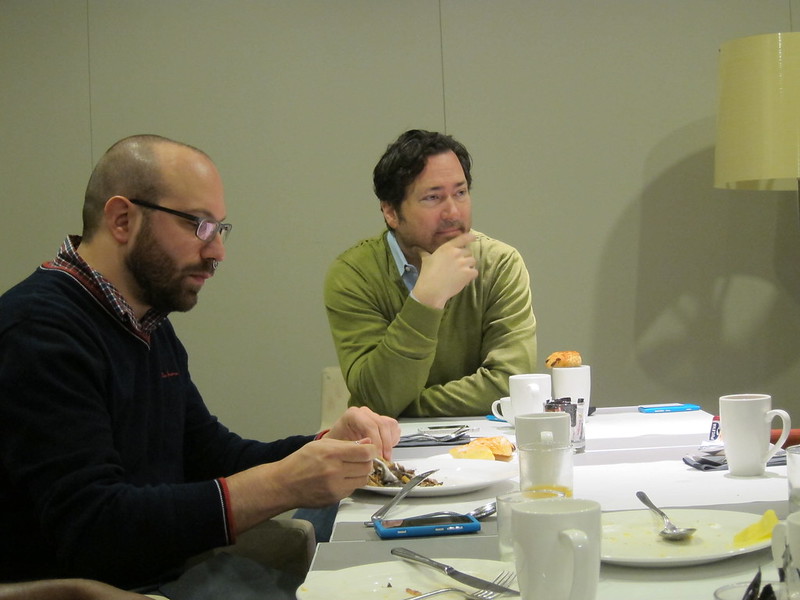