I am not really an audiophile, but I can hear the sound difference between headsets. I don’t own much headsets as I prefer earphones. The only headset I got is the Nokia Purity HD Stereo Headset by Monster which is retailing for S$298. The Logitech G930 Wireless Gaming Headset on the other hand is retailing for S$249 which is slightly cheaper.

The fit of the Logitech G930 is comfortable, this is because it is big as it is not meant to be portable and it is not that heavy too (~300g). The ear piece covers your whole ear, isolating some minor noises in the background. Coupled with a noise-cancelling microphone, it makes a great all-rounder headset, not just only for gaming. Perhaps in the future, Logitech should consider getting a Skype Certification for it’s successor because I think it makes a great Skype headset!

The only downside about the Logitech G930 is that it does not have Mac support! It still works on Mac, but as a basic headset as there are no drivers for it. Case in point, you will not be able to enjoy the 7.1 Dolby surround sound.

The Logitech G930 is a wireless headset with built-in battery that last for 10 hours. I tested it at an ad-hoc manner and I managed to get about 10 hours and 15 minutes of usage in total. Despite it being wireless, you can charge and use it at the same by plugging the Micro USB cable of the receiver base to the Logitech G930. It took me about 4 hours to get it to full charge for the first time.

The wireless range I would say it is decent but similar to most 2.4 GHz wireless devices, it doesn’t pass through solid objects like concrete or door very well. I managed to get roughly about 8 meters measured from my room to the kitchen before it gets cut off. Once it is cut off, it will automatically connects back if it is back within range again.

The 3 programmable G-Keys are on the left side of the headset. By default G1 is Next Track, G2 is Play/Pause and G3 is Previous Track. Personally, I have no use for the G-Keys on the Logitech G930 because pressing the G-Keys on my Logitech G19 keyboard or Logitech G600 mouse is much faster.

Below the 3 G-Keys is the mute button and the volume scroller.

The Dobly 7.1 surround sound switch is at the side together with the power button. By default the Dolby switch is off, you have to switch it on by sliding it to the right to enable the 7.1 surround sound. I no have no idea why a switch is needed for this, it should be enabled by default and if you want to disable it, do it in the Logitech Gaming Software.

You can “test” the 7.1 surround sound by going to the Logitech Gaming Software and click “Experience Surround Sound”.

Microphone
The microphone is located on the left side of the headset. By the way, I love the microphone implementation, to switch on the microphone, just pull it down and if you no longer need it, just push it back up to mute it. Once muted, the tip of the microphone will have a small red glowing light.

The microphone has noise-canceling feature and it works pretty well. I tested it with my television and fan switched on and I still can hear my voice clearly over a Skype Test Call service.

The Logitech Gaming Software also includes “Voice Avatars”, you can filter/transform your voice to some weird voices on the fly! Imagine having a Skype call using that!

As mentioned previously in the Logitech G19 Gaming Keyboard review, your gaming profile can be shared across all supported Logitech Gaming Devices and that includes the Logitech G930. 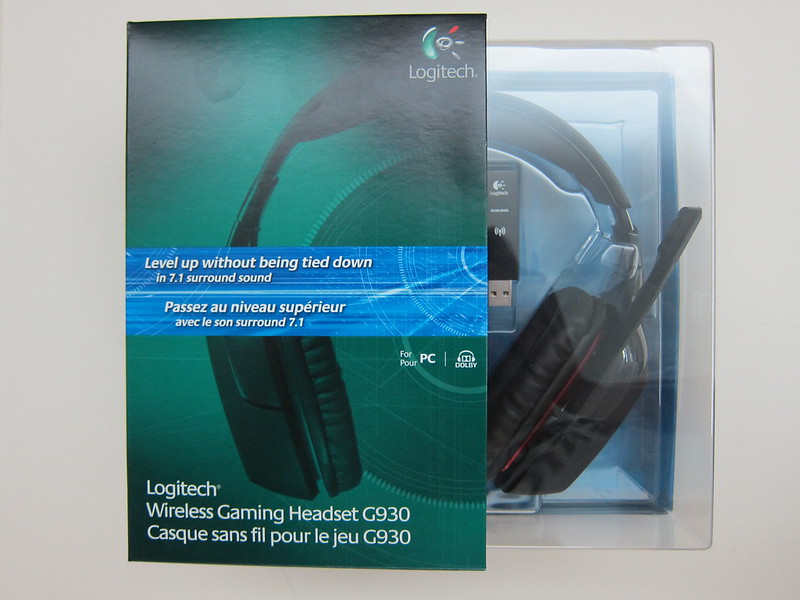 Giveaway
Thanks to Logitech, I will be giving out a brand new Logitech G930 Wireless Gaming Headset worth S$249 to 1 lucky winner.